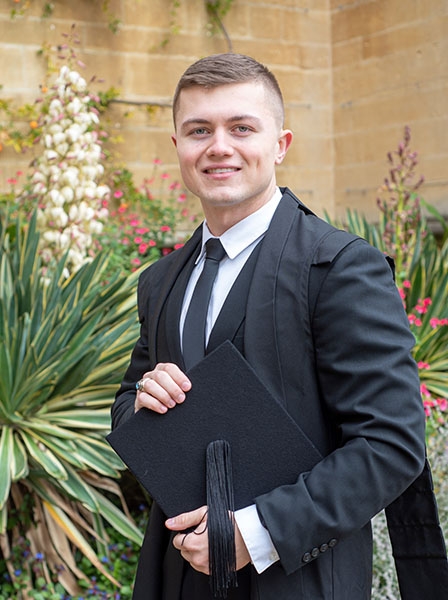 2Lt USAF as of April 2020, Graduate Student in Department of Engineering Science at University of Oxford researching Hypersonic Aerodynamics

Most special SystemsGo memory or experience:

I would say there were two, both at the launches of the rockets I worked on. The first was when our Tsiolkovsky Level rocket was descending. We realized one half was attached to a drogue chute and the other was attached to the main chute. We had failed to fully close a carabiner that attached the two halves of the rocket together. However, as the recovery system was overengineered, we still recovered both halves with minimal damage. The second came upon launch of our Oberth Level rocket. It shot into the sky, broke through the cloud deck, and we never saw it again as our previously flight-tested GPS unit decided to fail upon launch. To me, both show the beauty and difficulty of aerospace design and experimentation. It takes months of work to achieve a working solution, but only a small error to lead to large problems in flight.

In what ways did SystemsGo influence/guide/help you in your career?

I knew from a very young age I wanted to become an engineer but lacked a specific direction. As soon as I began learning the basics of aerodynamics and aerospace vehicle design in my first SystemsGo course, I knew I had found my passion. Moreover, my instructor in that course, Mr. Dale Hobbs, also recommended I investigate the USAF Academy which I ended up attending two years later. Although these SystemsGo courses were not the only influences that led to my current path, it is fair to say they were instrumental in my choice of undergraduate major and institution.

I am currently working toward a graduate degree, and hopefully a DPhil (PhD equivalent) which has been a life goal of mine. Additionally, after leaving Oxford, I will attend USAF Undergraduate Pilot Training to start a flying career. I would love to combine my two passions for engineering and flight as a USAF test pilot one day if given the opportunity.

Outside of education and career, I am becoming an avid reader of history and political theory. I have also recently reprised my role as an American Football player as an Oxford Lancer team member, an activity I assumed was over after my high school days. I enjoy skiing, hiking, and will hopefully complete my first Ultra Spartan race this fall.

Anything else you want people to know about you and SystemsGo?

I believe SystemsGo was a program that changed the trajectory of my life and career. I try to visit my high school’s current class whenever I am back in town because I think alumni volunteering even a little bit of their time can really drive a school’s program forward. Every time I visit, I am amazed about how much the current students have advanced beyond where my class reached in our two years. Furthermore, I think the personal and professional benefits of going through the courses cannot be emphasized enough. The opportunities to try and fail both technically and in leadership are exceedingly rare in high school and helped my development as a leader even in the four short years since I graduated from high school.

Do you have a SystemsGo story to tell? We want to hear it, and share it.
Fill out the questionnaire and return it, or contact us directly: