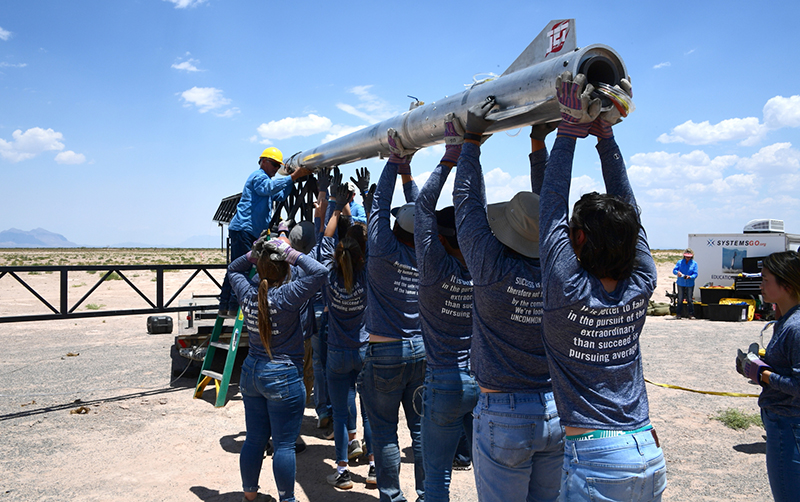 July 15, 2021–Three Texas high schools participating in the highest level of the SystemsGo rocketry program have returned from the U.S. Army’s White Sands Missile Range after launching rockets they designed and built. Vehicles from all three schools were able to leave the launch rail during the June 26 launch day.

After having to cancel the 2020 launches due to COVID restrictions, Scott Netherland, Executive Director of SystemsGo, was pleased schools were able to “be back in the launch business.”

“The three teams that designed and built their own rockets all achieved some level of success despite the challenges of getting together during the past school year,” Netherland said. “And, we deeply appreciate WSMR’s continued support of the SystemsGo program and for giving our students the opportunity to test their rockets.” 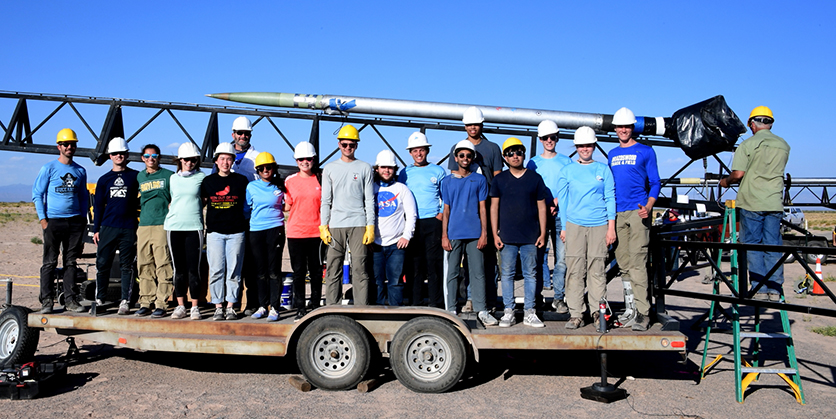 Brazoswood High School was first to get off the rail, launching at 8:15 am Mountain Time.

“It was a beautiful launch and potentially a new altitude record for this program,” Netherland said. “Unfortunately, the WSMR radar did not capture altitude or tracking data on this rocket. We are hopeful to still recover the rocket’s nosecone containing the altimeter and to recover altitude data from the flight.”

Next up was Alamo Heights. After some repairs to their oxidizer fill system, the rocket was launched at 11:32 am. However, the nozzle section blew apart on ignition leaving the rocket to depart the rail propelled by the force of the 800 psi of pressure released by the oxidizer tank. Once clear of the rail, the rocket rolled over and landed approximately 100 feet away from the launch pad.

Union Grove made the final attempt of the day. They were able to launch their rocket at 2:20 pm. They had a great ignition, but much of their fuel grain blew out the nozzle limiting its altitude attained.  It reached 3541 feet before rolling over and hitting the desert floor.

Both Brazoswood and Union Grove earned the Newton Award. This banner recognizes the class for building and launching a vehicle at White Sands Missile Range that achieves an apogee of 0-25,000 feet with ignition, minimum 5-lb payload, and a recovery system.

SystemsGo has been utilizing the resources of the U.S. Army testing range for 22 years. Netherland is optimistic the relationship will continue. It is a unique partnership between the U.S. Army and the SystemsGo program and the high schools that offer the curriculum.

“Given the positive response we got from the new Commanding General, Brigadier General Eric Little, we are optimistic about continued support from WSMR in the immediate future,” Netherland said. “We will continue to pursue sources of funding to reimburse WSMR for its logistic support. It is vital that we continue to offer this opportunity to high school students in a growing number of schools in Texas and other states.”

SystemsGo is the Fredericksburg-based nonprofit STEM (Science, Technology, Engineering, Math) curriculum that uses the Socratic teaching method and inquisitive learning based on a problem and project-based model to invoke and stimulate skills in design, development, testing, analysis, and innovation. Currently, students from more than 60 participating high schools across four states design, build, and launch rockets designed and built to achieve one of three different design goals: loft one-pound one mile high; achieve the speed of sound; or attempt to reach altitudes in excess of 80,000 feet at WSMR.

More information on SystemsGo, including how to start a program, is at www.systemsgo.org.