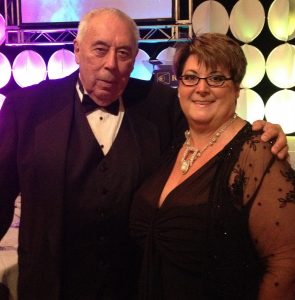 Joyce BK Abbey (right) has worked with SystemsGo for 10 years. Her father is George Abbey, “The Astronaut Maker,” according to a new book of the same title.

July 23, 2018–Anyone who has attended a SystemsGo launch will recognize “The Voice” of mission control. That would be Joyce BK Abbey, who has worked with this STEM program for 10 years in many ways, but most recognizably by narrating the launches, adding in trivia and tidbits from a lifetime of working around the Johnson Space Center.

Chicago Review Press has just released a new book about her father, George Abbey. At NASA they called him The Astronaut Maker, which is the title of the book.

For nearly 50 years, George Abbey was involved in every aspect of NASA starting shortly after it became NASA, up through when he served as Director of the Johnson Space Center in Houston, and to this day.

Abbey was the man who rode to the launch pad with the astronauts before every flight. He helped select them, assigned them to missions, celebrated their successes, and comforted their families after disaster. He procured funding for their training, fought battles for their safety, and moved administrators around like chess pieces on a board that few people knew existed. 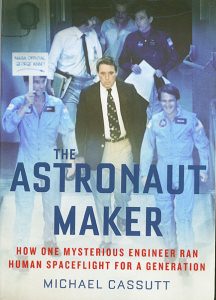 The book is available on Amazon.com, and you can read the full review here.