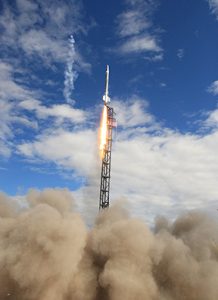 Aug 1, 2016–While most high school students were spending their summer on vacation, teams of high school “rocket scientists” from five Texas high schools traveled to White Sands Missile Range in New Mexico. Their goal was not to sightsee, but to get a rocket to boost a 35-pound payload up to 100,000 feet.

It is part of the SystemsGo rocket program that is taught in 44 schools in Texas and will start in New Mexico next fall.

This year five schools took seven rockets to WSMR–Alamo Heights, Union Grove, Booker T. Washington (Houston), Anahuac, and Fredericksburg. Together, they were able to get four of seven rockets off the rail–a “significant achievement” according to Scott Netherland, Executive Director of SystemsGo.

“Taking a 35-pound payload to 80-100,000 feet is a major step up in the design and performance of a rocket,” said Netherland, who points out the importance of the highest level of the program, known as the Goddard level. “To go from something we can do locally to something that requires the support of a national military range is pretty incredible. And this year we have extended the opportunity to more schools, all based on their successful performances at the first two levels.”

Those levels include Tsiolkovsky–lofting a one-pound payload one mile high; and Oberth–reaching the speed of sound.

What follows is a summary of the 2016 WSMR launch attempts:

Arrive at WSMR for briefing and head to range to prepare launch rail and fire control systems.

Ended the day with all preparations made, the first six scheduled rockets all pressure tested, and first rocket (Alamo Heights) uploaded on the launch rail.

Alamo Heights rocket #1 reached an altitude of 10,082 feet before having a catastrophic burn through of the fuel grain. https://youtu.be/yIwEeQl2pCA

Union Grove got off the rail for their very first time, but it appeared that the nozzle retaining ring blew out (along with the nozzle) and lost thrust. https://youtu.be/YKnp4Ho2c1A

Alamo Heights #2 rocket departed the rail, but immediately had a side body blowout (possibly same fuel grain failure as their #1 rocket, but much earlier in flight). https://youtu.be/KTgqRABJ7yQ

Anahuac uploaded, fueled and launched. They also had their first successful launch getting off the launch rail. Something blew out of their nozzle causing a loss of thrust. Rocket did “roll over” and travel horizontally before impacting the ground. https://youtu.be/ZgeLaJTLKkM

Booker T Washington rocket #1 was next and failed to get ignition. May have burned the wires going to their injector and shorted the wires, precluding oxidizer flow.

Booker T. Washington rocket #2 failed to ignite, possibly due to wiring short. They chose not to retest either rocket.

Ended Wednesday with Fredericksburg upload on the rail.

Fredericksburg filled fuel tank, failed to get ignition. Likely due to either a frozen injector valve, or a frayed wire in the injector electrical system in the ignition process.

“The positive part is that the thing we tested the most was that charge–under all temperature and pressure conditions–and it worked every single time in testing,” said Brown, who plans to study aerospace engineering at Texas A&M in the fall. “So the one thing I feel best about was that the system that failed was a freak thing. It was not any shortcoming on our end, just something we could not control.”

That type of learning and analysis is the basis of SystemsGo, the project-based Science, Technology, Engineering and Math (STEM) curriculum first developed by Brett Williams while teaching at FHS in the 1990s. (See History sidebar)

“It is important that these students know how proud I am of them,” Matthes said. “Even though all the rockets didn’t fly, it is a phenomenal accomplishment to be able to complete this project. They basically do in eight months what industry would do, but they only get one chance to test it. There is no ‘back to the drawing board.’ It takes courage to know they only get to test it once.”

Netherland acknowledges the support they get from parents, volunteers, and especially the staff at WSMR. Netherland calls the way the US Army works with the high school rockets “superlative.”

This year, with seven SystemsGo rockets and two other missions active on the range at the same time, the White Sands staff went to extra lengths to mitigate any conflicts. On day one, another mission would have conflicted with the SystemsGo launches. They could have shut down the high schoolers, but instead they looked at the rocket parameters, determined it would not exceed a certain range, so would be no conflict, and green lighted the launch.

“That is an example of the White Sands staff working above and beyond with our student group to maximize our opportunity on the range,” said Netherland, who also noted that the Commanding General–Brig Gen Tim Coffin–came to the range one day to observe the students in action. “We are the only high school program in the country that gets to do that, and I can’t tell you how much it is appreciated.”

Again, the ultimate target for the SystemsGo program lies beyond the top of the launch rail.

“Students who have performed at this level are more likely to achieve another degree of success in their future lives, both professionally and personally,” Netherland said. “Our goal is not just to build the rocket; we are hoping to build the most valued engineers.”

Teacher Brett Williams, a graduate of Texas A&M University and founder of SystemsGo, believed there was a better way to educate and motivate tomorrow’s innovators. Drawing on his training in the sciences and his work in the private sector, he laid the foundation for the program in his Principles of Technology class. With administrative and community support, Williams’s students began designing and launching rockets.

The classroom experience guided students through hands-on research, as well as design and development instruction within the engineering and technology design disciplines.

Now SystemsGo, a 501(c)(3) nonprofit organization, shares its 4-year sequenced curriculum with high schools in Texas and New Mexico. The program, endorsed by NASA, now guides students from introduction to R&D and engineering skills to designing and building rockets for testing at altitudes from 80,000 feet to 100,000 feet, with launches at White Sands Missile Range carrying university payloads.

But the real goal is to encourage students to explore the boundaries of space, while expanding their own boundaries as they launch themselves to become tomorrow’s innovators.

Former students of this program have gone on to study STEM related fields in college and are working for organizations such as NASA, the Department of Defense, and other private sector aerospace and engineering firms. SystemsGo is endorsed by NASA and certified by The Space Foundation.

More information on becoming involved with SystemsGo is available at www.systemsgo.org.