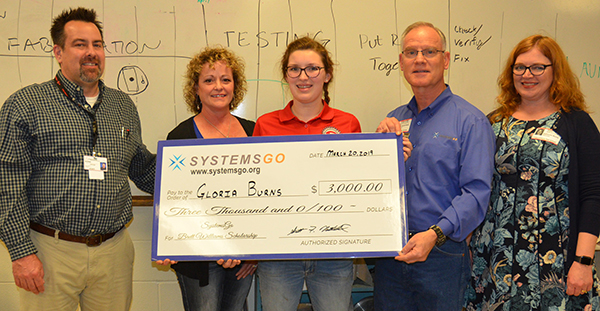 Mar 29, 2019–The Board of Directors of SystemsGo has announced Gloria Burns of Fredericksburg High School as the 2019 recipient of the SystemsGo Brett Williams Scholarship in the amount of $3000.

Gloria Burns is the daughter of George and Katie Burns, and is a senior at Fredericksburg High School. She has completed all four years of SystemsGo, a Science, Technology, Engineering, and Math (STEM) curriculum that develops 21st century workforce skills. She has worked on teams building rockets that sent a one-pound payload to transonic speed, and this year is Chief Engineer for the student team designing and building a rocket to achieve 80,000-100,000 feet launching at the Army’s White Sands Missile Range in June. Her teacher is Andrew Matthes.

“We are very proud of this year’s recipient,” said Scott Netherland, Executive Director of SystemsGo. “Not only has she participated in all four years of the SystemsGo curriculum, she has helped promote the program by speaking publicly about the impact it has had on her education. Gloria Burns embodies the effect we want to have on students. We feel she is well-equipped to pursue engineering studies.”

The annual scholarship was established in 2017 by the SystemsGo Board of Directors to sustain the legacy of SystemsGo founding instructor, Brett Williams. Each year it is awarded to a qualifying high school senior.

One candidate from each school may apply. They must have a Teacher Endorsement, have successfully completed the Tsiolkovsky level of the SystemsGo curriculum, and submit an essay describing the impact the program has had. The winner is selected via anonymous review by a scholarship committee of SystemsGo board members.

“This year’s applicants were extremely competitive and all very deserving,” Netherland said. “The scholarship committee members indicated they would be proud for any one of the applicants to have received the scholarship.”

The deadline for submitting the application is January 15. Information is available from SystemsGo teachers or by calling (830) 997-3567.