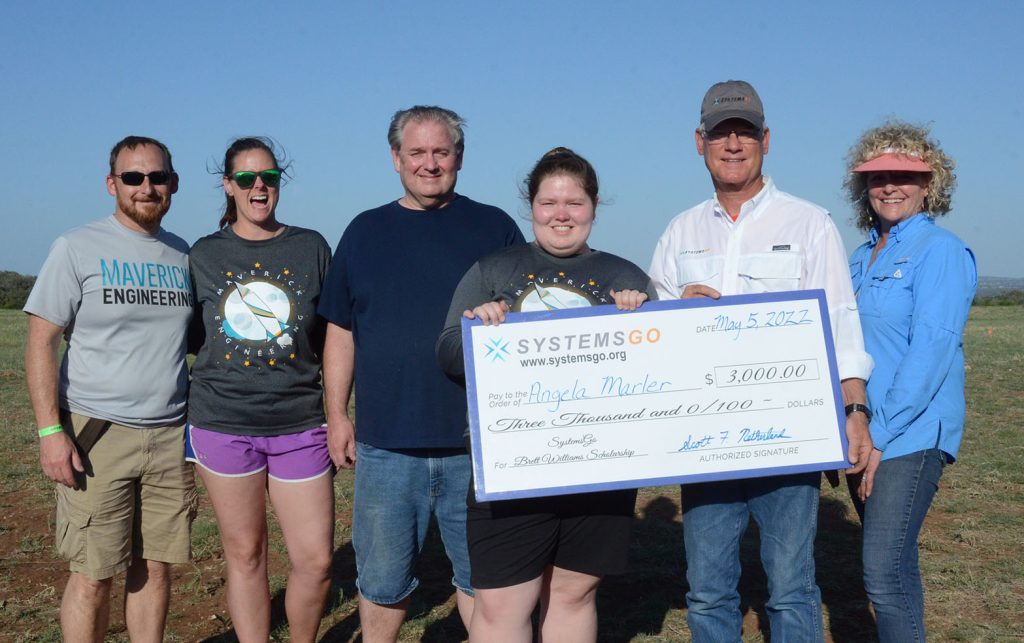 The $3000 scholarship was established by the SystemsGo Board of Directors in 2017 to sustain the legacy of founding instructor Brett Williams. It is a merit-based scholarship awarded to a current high school senior that has completed at least the Tsiolkovsky level curriculum and launched a rocket designed to take a one-pound payload to one mile.

“Every year we award a scholarship to one of the 3000 students that go through our program,” said Rebekah Hyatt, SystemsGo Program Director. “The recipient exemplifies the philosophy of SystemsGo, to demonstrate the ability to problem solve in a project-based STEM classroom. We are proud to present the Brent Williams Scholarship to Angela Marler.”

Marler’s lifelong interest in engineering and space was solidified in 7th grade when she did a research project about a potential career. Her favorite subject was math, and she became “enamored” of aerospace engineering. So she was pleased to learn that her high school offered the SystemsGo program.

“When I heard my freshman year that we could do an aerospace program in 11th and 12th grade, I was shocked,” Marler said. “I was so excited because I was going to get to experience and learn about what I’m going to do in the future.”

Marler plans to attend the University of Texas at Arlington and participate in their co-op engineering program with Lockheed Martin.

“My participation in the SystemsGo program has helped to further my resolve by allowing me to participate in the engineering design process and develop various ‘soft skills’ necessary,” she said. “This is a huge opportunity for me and it’s going to allow me to focus on my studies and really dig in to all of the engineering aspects that I’ll experience in college.”

SystemsGo uses a problem and project-based model to invoke and stimulate skills in design, development, testing, analysis, and innovation. It currently is used in dozens of high schools across four states. More information at www.systemsgo.org.