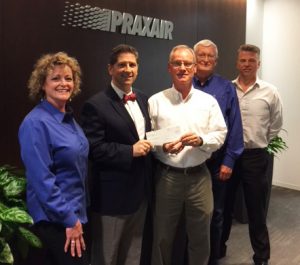 June 2018–For the third year in a row, Praxair, Inc., a global industrial gas company based in Danbury, Connecticut, has supplied the rocket fuel for all SystemsGo rocket launches.

“Their program is focused on STEM education, so I thought it might be a good fit with SystemsGo, a project-based high school curriculum that focuses on Science, Technology, Engineering and Math (STEM),” Netherland said.

Chris Granger, the General Manager for Praxair Distribution Inc., for the Western Gulf and South Regions, has taking the point for orchestrating the nitrous supply, used in launching the student-built rockets.

“Chris was particularly instrumental last year when there was a nationwide shortage of nitrous oxide,” Netherland said. “He found the product in Mexico and had it imported for us to support our Willow City and Smith Point launches. We are honored to partner with corporations like Praxair who believe in the power of our curriculum and make an investment in our students.”

Praxair is a nation-wide supplier of compressed gas products and is also in over 50 countries worldwide.

“SystemsGo is an exciting program and one Praxair is pleased to support,” Boerema said. “The organization has a strong history of providing an innovative approach to encouraging students to choose STEM studies and we are proud to help them launch new careers into these fields.”

SystemsGo is a Fredericksburg-based education non-profit that provides an innovative rocketry/aerospace curriculum to more than 50 high schools in Texas, New Mexico, Oregon, and Utah.

These student-designed and built rockets are intended to accomplish one of two missions: to take a one-pound payload one-mile-high, or to break the speed of sound. Upper level students attempt to loft a scientific payload to 100,000 feet with launches in partnership with the U.S. Army at White Sands Missile Range.

Information on the rocket launches and the SystemsGo program are available at www.systemsgo.org or by calling 830-997-3567.