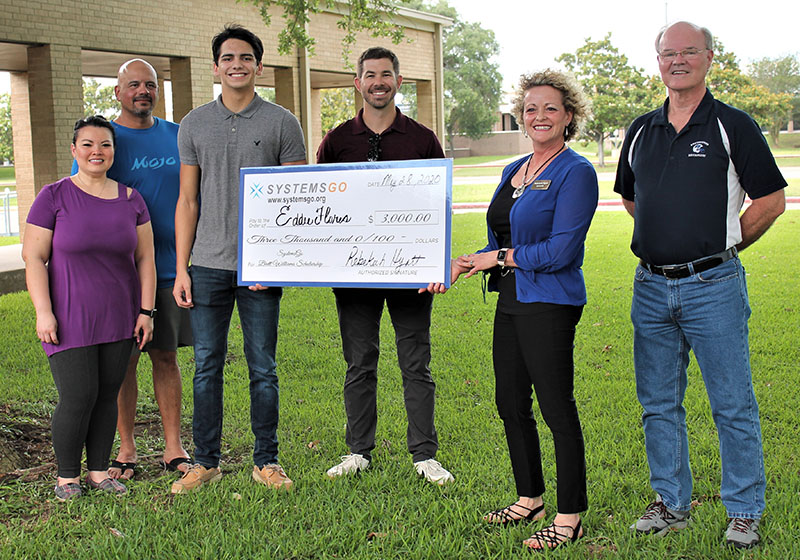 June 1, 2020–The Board of Directors of SystemsGo has announced Eddie Flores, Jr., from Brazosport High School in Clute, Texas, as the recipient of the 2020 SystemsGo Brett Williams Scholarship in the amount of $3000.

Flores joined the program in his junior year at BHS, when he was lead engineer for the team which designed a rocket to loft a one-pound payload one mile high. This year he was working on the carbon fiber composite for the Goddard Level rocket before the launches were scrubbed due to the shutdown of Texas schools.

In an article by Corinna Richardson in The Facts newspaper, his instructor, Chris McLeod, was quoted as saying Flores “led by example.”

“He was always early, he stayed late,” McLeod said. “He had a great attitude all the way through the year, and he was the encourager of his teammates. I’m really proud of him.”

Flores plans to attend the University of Texas at Austin next year, where he hopes to continue to study rocketry. His goal is to be an aerospace engineer with SpaceX or NASA.

“You read his essay and you get a feeling of his determination,” said Rebekah Hyatt, SystemsGo Program Director who presented the award. “When Brett Williams started SystemsGo 24 years ago, he had a vision to transform the workforce by producing problem solvers and critical thinkers, determined individuals that understand there is much to be learned through apparent failure in the process of true innovation. The recipient of this scholarship embodies that vision.”

The annual scholarship was established in 2017 by the SystemsGo Board of Directors to sustain the legacy of SystemsGo founding instructor, Brett Williams. Each year it is awarded to a qualifying high school senior.

One student from each school may apply. They must have a Teacher Endorsement, have successfully completed the Tsiolkovsky level of the SystemsGo curriculum, and submit an essay describing the impact the program has had. The winner is selected via anonymous review by a scholarship committee of SystemsGo board members.

Information on applying for the scholarship is available from SystemsGo teachers or by calling (830) 997-3567.